IT’S that time of the week again where we reveal the most interesting planning applications determined by or submitted to the Royal Borough of Windsor and Maidenhead and Slough Borough Council.

Both local authorities have had a field day refusing applications this week and a farming house, a bungalow, and a storage site were all thrown out.

Planning officers at the Royal Borough of Windsor and Maidenhead refused this application on the grounds it is inappropriate for the green belt site and would cause harm to ancient woodland surrounding the area.

The proposal was to seek to construct a chalet-style family home next to the farm consisting of two bedrooms for children, a master bedroom, an additional bedroom for sleeping during unsociable hours, a bathroom, and an en-suite.

There is a number of agricultural enterprises at the farm which includes producing free range duck eggs, slaughter and cooking of duck, collection of native fungi, laying quail, and selling timber and coppice products.

The applicants, Robert and Jodie Taylor, manage the farm and currently have two staff full-time and two part-time workers and they anticipate additional workers will need to be hired as the enterprises expand by adding quail.

They say more labourers with experience and skills will be needed to help handle the ducks and the quails at the farm.

Planning officers claim the business has already caused harm to ancient woodland and any other expansion would lead to further harm or loss of woodland.

Change the use of land to allow storage use at land to the west of Riverside Transport Cafe, Colnbrook By-Pass, Colnbrook, Slough (P/13081/001).

The applicant wanted to place mobile storage (lorry) containers – which can be rented out – on disused land within the green belt and Colne Valley Regional Park boundary.

This would require security fencing to be installed around the perimeter.

Although located on a green belt site, the applicant believes this application it won’t be adversely affected and the units will make great use of disused land, making a ‘positive contribution to the local economy and supports local business’.

In the design and access statement, it states: “The proposal will ensure that the owners of Riverside Transport Café continue to run a successful business and therefore approving this application will support a local business and provide a positive contribution to the rural economy.”

Planning officers disagreed and decided to refuse the application on the grounds it will cause significant harm to the green belt site and no ‘very special circumstances’ exist to justify this ‘inappropriate’ development.

They added this application did not consider surface water drainage, nor did it consider its impact to nearby neighbours with noise and the levels of activity it would have. 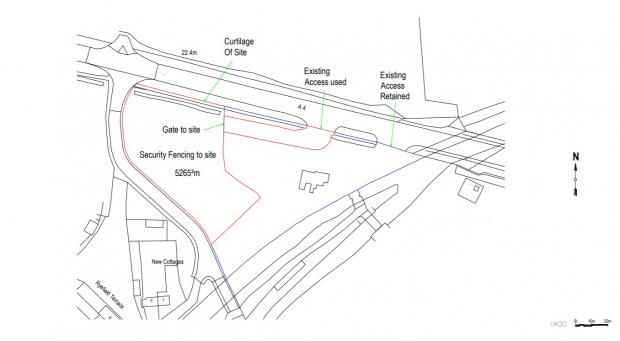 Outline application for access and scale for the construction of a house following the demolition of an existing, detached garage at land rear to 18 Highfield Lane, Maidenhead (20/01306/OUT).

An application to demolish a stand-alone garage to construct a single-storey home in Cox Green was refused by officers.

If plans were approved, demolishing the garage would’ve made way for an access drive to the rear of the site.

In the design and access statement, it states: “The site is of sufficient size to accommodate a modest sized single storey dwelling with little visual or other impact on surrounding properties. This would also facilitate the plot to be used for multi-generational use.”

However, officers disagreed and refused the application on the grounds the proposed home will be out of character and will form a cramped form of development.