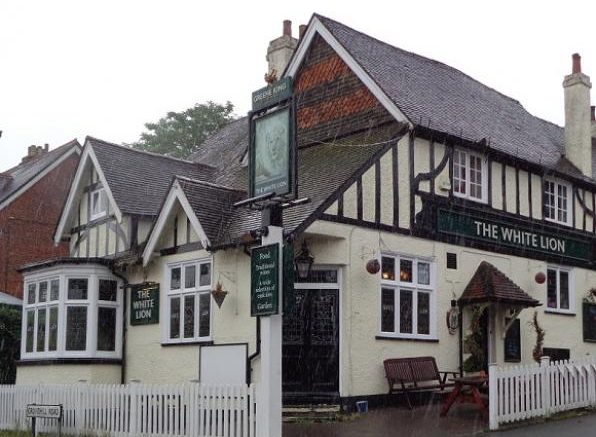 The fascinating histories of the Windsor pubs

A brief mention exists of the earliest alehouses in the records held by Windsor Corporation in 1528 whereby rentals were shown as payable for a number of establishments. There were over twenty establishments mentioned at the time. The Mermaid, The Black Eagle, The Goat, The Maidenhead, The White Hart and The White Lion being amongst them. It is interesting to note that Windsor Corporation appear to be the owners of a least fifteen of them.  At this time the Royal Court were frequently at Windsor and the demand was growing for new inns and alehouses to satisfy the town’s many visitors. It appears that Windsor Corporation were not slow in leasing some of their properties to meet this trend. St George’s Chapel saw the way things were going and surviving property deeds show that in Tudor times they owned The Angel, The Broad Arrow, The Bull by Windsor Bridge as well as The Crown, The Hartshorn, The Swan, The Talbot and The White Horse. Four of these were inns. 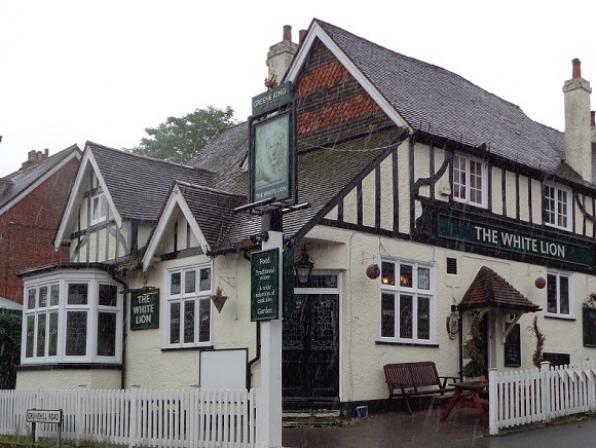 Windsor was still a very small town, its resident population scarcely a thousand people, its buildings concentrated around the market place and along the five main streets. The inns and alehouses were to be found mainly along the High Street and Thames Street. Between the top of Peascod Street and the parish church there were at least six drinking establishments. The Mermaid (on the site of the Castle Hotel) stood next to The White Lion. In Tudor times, alehouses were first licensed under the Licensing Act of 1552. These were then the humblest of the three different types of establishments, often catering for the poorer section of the community, offering cheap food to workmen as well as beer and ale. Taverns were first licensed in 1553 and sold wine, not ale, and some of the taverns were also inns. It seems since time immemorial the main purpose of inns was to provide guest rooms, stabling and food and drink for travellers. In Tudor times they did not have to be licensed at all. Gradually, however, the alehouse laws were extended to cover inns also. A certificate, drawn up in 1577 by Windsor Magistrates at the request of the Government, gives the following numbers for Windsor: eight inns, five taverns and eight alehouses.

In a catalogue of 1636 compiled by John Taylor, a waterman of London, The Cross Keys, The Garter, The George and The White Hart were listed as Taverns. Others were classified as either inns or alehouses.  The 1552 Licensing Act marked the beginning of a period of increasing restrictions on the sale of ale and beer. Parliament, Council Chambers and pulpit condemned alehouses as the meeting places of people of disrepute, ‘nests of Satan’ and the focus of public disorder. Accordingly, licensees were required to enter into bonds or recognizances, that they would not allow disorderly behaviour or harbour rogues and vagabonds. In the reign of James I (1603-1625) further laws were introduced to ‘restrain the inordinate tippling in inns, alehouses and other victualling houses’, and to prevent the ‘loathsome and odious sin of drunkenness’. Failure to obey led to a period of time spent in the stocks. Windsor was a puritan town and the town stocks stood almost opposite The Mermaid Inn. Records kept for the year 1618 indicate thirty-four men; both Innkeepers and Alehouse keepers, appeared before the Town Magistrates for breaking these laws. It seems that despite the many laws prevailing, the number of Taverns and Alehouses was rising. There were twenty-one in 1577 in Windsor, thirty-four in 1618 and at least forty-nine in 1657. ‘Short measures’ were a constant problem with proprietors constantly appearing before Windsor Magistrates. In one year nearly forty-four innkeepers were found guilty.

In 1656, the proprietor of The Mermaid Inn, George Pennington, was grappling with a country wide problem, i.e. lack of small coins in circulation. He came up with an interesting solution that saw him issuing small metal tokens with a face value of half a penny with his inn sign and name on both sides. The Civil War (1642-1649) saw a huge increase in population when Commonwealth Troops numbering approx 2,000 were quartered in Windsor. One would have thought that trade would boom, however troops were billeted in every available residence and many landlords found themselves ordered to ‘loan’ troops money. Most of the alehouses and inns brewed their own ale or beer at this time. I have borrowed heavily information contained in a small pamphlet titled ‘From Tudor Inn to Trusthouse Hotel’ by Judith Hunter, which shows the extent of her research into Tudor times. One important note here relates to her source material, which clearly indicates that a visit to the Berkshire Record Office would reward all those wishing to prepare a more exhaustive history.

This short period of time is poorly documented but some facts could be gleaned from the Windsor & Eton Express newspaper. Court proceedings were obviously good copy and give insight into daily life. Restricting myself to articles mentioning public houses we find that in 1834, Reeves Beer Shop was known either as the Tea Gardens or the Royal Tea Gardens situated in Russell Street. The owner Elijah Reeves together with his wife were arraigned before Windsor Magistrates in 1842 charged with keeping a common brothel. After a lengthy hearing, Elijah was found guilty and fined £20. The Magistrates had no power over his licence, as they did not control beer shops. All that was required then was a licence issued by the Excise costing £1 in order to sell beer.

The Britannia, a beer shop at the junction of Keppel Street and Barrack Lane was run either by George or William Hazlehurst. Samuel Saunders ran an un-named Beer Shop in Bier Lane in 1837. In 1836, William Willer was the owner of the Public House on the Berkshire side of Datchet Bridge, thought to be the Crown and Angel. A Joseph Willer ran the Free House in Clewer Lane in 1842. In 1834, a Mr Hughes ran a Beer Shop in Prospect Place (St Leonard’s Road). In 1842, William Henry Wheeler ran Wheelers Beer Shop in George Street. This establishment was also known locally as the Rose and Crown.

Between 1837 and 1842, The Hope Inn in Frogmore Road saw the landlord hosting many civic events entertaining local gentry as well as Royalty. The owner Mr Byles would not have known that the Inns very existence was threatened by the closure of the road to the public with the coming of the railway.

In 1842, a Mr Rhodes ran an unnamed Beer Shop in George Street. In the same year, Mr Cutt ran the Horse and Groom Public House on Castle Hill. Again in the same year a very unusual event took place in the Magistrates Court. It related to the licensee of the Stag and Hounds Public House. The incumbent licensee, Mr Carpenter applied for a transfer of the licence to a Mr Knowles who was the owner of the Standard Public House in Market Place. Immediately this was granted, Mr Knowles asked the Magistrates for the licence to be transferred again, this time to a Mr Angel who had been a butler to a local landowner in the area. The application was granted.

The Black Horse in Park Street was the scene of a number of auctions in 1837. In 1834, Mr James Hall ran the Surley Hall Public House but later in 1836 the owner was a Mr Duckett. In 1837, the Leather Bottle Beer Shop was open for trade in Clewer Fields. In 1836, the New Inn in Park Street was being run by a Mr Clode whilst in the same road the Two Brewers was run by a Mr Pursey. That same year saw, Mr Thomas Dash was running the Star and Garter Inn in Peascod Street whilst in 1837; a Mr Pook ran the Star and Garter Tap. Samuel Coombs ran the William the Fourth Public House in Thames Street in 1837. Mr Stephens ran the Swan in Clewer in 1836 whilst a Mrs Lillywhite ran the Swan in Thames Street in 1836.

These extracts whilst they are brief, at least provide one with an idea of the extent of the public houses in the area. Another snippet of news appeared in the Windsor and Eton Express on 7th October 1837 in which the reporter disclosed that the Mayor, whilst examining the list of voters in the borough found a number of discrepancies. It appears that several voters described their addresses as being adjacent to ‘Beaumont’s Pond’ which no longer existed. Also others had given their residence as being in a ‘lane behind the Infantry Barracks’. The Town Clerk was instructed to call the former ‘Spital Road’ and the latter ‘Barrack Lane’ and that these names be painted up in their respective places.

During my many visits to Windsor Library I discovered Hunts, Royal Windsor Directory of 1846, this book is in remarkably good condition. It lists the merchants and some of the inhabitants of Windsor in 1846. In its preamble it indicates that the population of Windsor in 1841 was 9,062, this total included the Castle residents and well as those in the cavalry barracks but does not appear to include outlying districts. Browsing through the book, it became obvious that the main areas of activity were centred on the High Street, Peascod Street and Sheet Street areas. Everywhere else was open space. Street names were different and house numbers virtually non-existent. Beer Houses do not appear to have published names in the main, although they picked up local names sometimes after the Christian name of the owner. It seemed that putting together a list of licensed premises would not be easy. Some help though was close at hand in the form of the 1841 Census for Windsor.  What was apparent was the number of beer retailers shown in the census. Looking at the addresses of the establishments, one can jump forward to 1898 and see that they were the nuclei of the pubs better known to us today.

I will admit that the task of putting together a list of ‘drinking establishments’ for the year 1846 was extremely frustrating and the lack of source material has led me to speculate with both mysteries and omissions in my script. I will expand on this later. I should at this point attempt to paint a small portrait of the areas of population. Away from High Street, Thames Street and Peascod Street, one finds small areas of intense habitation. Roads such as George Street (now Station Approach) led down to the Goswells and from the occupations listed in the census, it was purely working class. Another hub of habitation was centred on Barrack Lane (now no more than a footpath), Love Lane (demolished) and Keppell Street was just frantic with huge families squashed into rooms, bringing a whole new meaning to the term, ‘multiple occupancy’. This area disappeared when the Infantry Barracks was extended.  Its lends much credence to the positioning of the towns gaols on the corner of Frances Road right next to Keppell Street and the other gaol in George Street.