The 21-year-old shed tears of joy as he was surprised by family and friends with a party next to his home in River Road.

After a long flight home from Japan, Tom stepped out of his car a short distance from his home to be greeted by a supportive crowd who’d come to congratulate him.

Tom held his head in shock as he took in the roaring crowd, and then grabbed his two gold medals walking with his mum Jacquie Hughes by his side, girlfriend Catherine and his brothers and sisters. 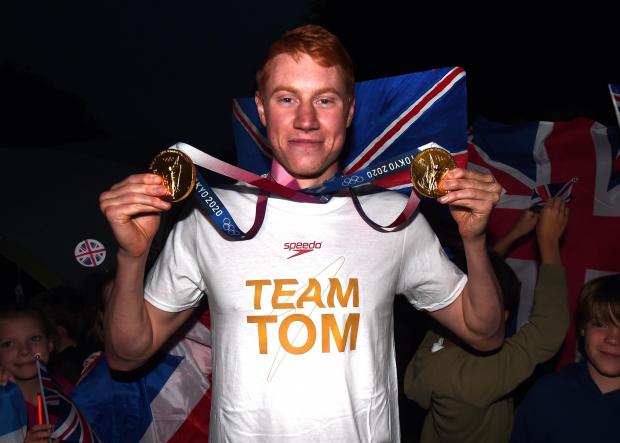 Photo of Tom with his two gold medals by Eamonn McCormack, Getty Images for Speedo

He said: “Oh my god I’m actually like shaking. I’ve had the longest day and everyone knows I’ve been doing media and Team GB stuff and I had no idea this was waiting for me so thank you so much.

“This means the world. These (medals) are special, but this is more special, honestly, I can’t even begin to put it into words.

“I thought that watch party was quite something but this is a level above. Thank you so so much guys and These medals are yours just as much as they’re mine.”

His sister, Connie Dean, had played a major role in organising the surprise homecoming party and getting the word out to all of Tom’s friends.

She said: “If you know Tom, you’ll know how hard he worked. If you went to school with him, you know all of the early mornings, everything he’s done to get to this point, and it is no mean feat.” 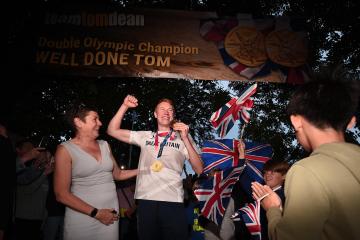