Steeped in ancient history and British heritage, Windsor Castle is the oldest and largest inhabited castle in the world. For almost 1,000 years, this iconic building served as a family home for British royalty. An extensive calendar of events runs here throughout the year, from exhibitions and performances to lectures and private tours as some of the things to do in Windsor. Occasionally, areas of the castle are opened for special visits like the Great Kitchen or the Tower. 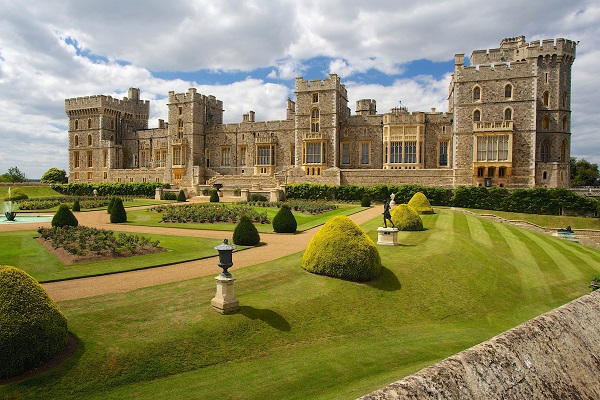 Windsor Castle is truly magnificent. Dominating the Windsor skyline it is easy to see how it has been impressing visitors to Windsor since being built over 900 years ago.

Windsor Castle is the largest and oldest occupied castle, being home not only to Her Majesty the Queen, but also to over 500 other residents who live and work in the Castle.

The History of Windsor Castle

Windsor Castle's Fortifed WallsWindsor Castle is a medieval castle built by William the Conqueror after the Norman invasion in 1066. Originally designed to strategically defend Norman dominance around the outskirts of London and an important stretch of the River Thames, it later became a favourite home and royal court for future monarchs.

The Castle was built as a motte and bailey, with three wards surrounding a central mound. This was gradually replaced with stone fortifications to provide protection to its inhabitants. Most famously the Castle withstood a prolonged siege during the First Barons’ War at the start of the 13th Century, and later parliamentary forces used the Castle as a military headquarters and prison for Charles I during the English Civil War.
Today the breach is no more and the external structure of the Castle exudes a sense of strength and power. By contrast, the interior is a showcase for royal opulence. Henry III was the first to turn his attention to creating a palace fit for a King and built a luxurious royal palace within the castle during the middle of the 13th Century. Edward III took rebuilding the Castle a stage further and produced even grander buildings that gained the reputation of the most expensive secular building project of the entire English Middle Ages.

Edward’s designs lasted through the reign of Henry VIII and Elizabeth I, during which time they made increasing use of the Castle as a Royal court and venue for conducting diplomatic entertaining.

Charles II rebuilt much of Windsor Castle during the Restoration introducing Baroque designs into the interiors. Then during the 18th Century George III and George IV rebuilt Charles II’s palace to give us the grand State Apartments that we see today, full of Rococo, Gothic and Baroque influences.

The architect was Geoffrey Wyatt, but after a few years of working closely with the Royal court he decided that his name made him sound too much like a commoner (which he was) so he asked the King whether it would be alright if he added ‘ville’ to his surname. The King allegedly replied “veal, mutton, call yourself what you will, its all the same to me.”

Despite the kings indifference, if you look into the history books today you will see that the architect is indeed recorded as Geoffrey Wyattville.

Since then the interior of the Castle has remained pretty much unchanged with the Georgian splendour still being on display today.
During the 20th Century, Windsor Castle returned to it’s roots as a protective palace when the royal family used it as a refuge from the bombing campaigns of the Second World War. It survived a fire in 1992 and is now one of the UK’s most popular tourist attractions, the Queen’s preferred weekend home and a venue for hosting state visits.